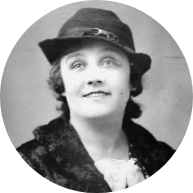 One of the UK’s most prolific and important ceramic artists, Clarice Cliff (1899-1972) is best known for her innovative, colour-rich designs.

Do you have a Clarice Cliff piece to sell? 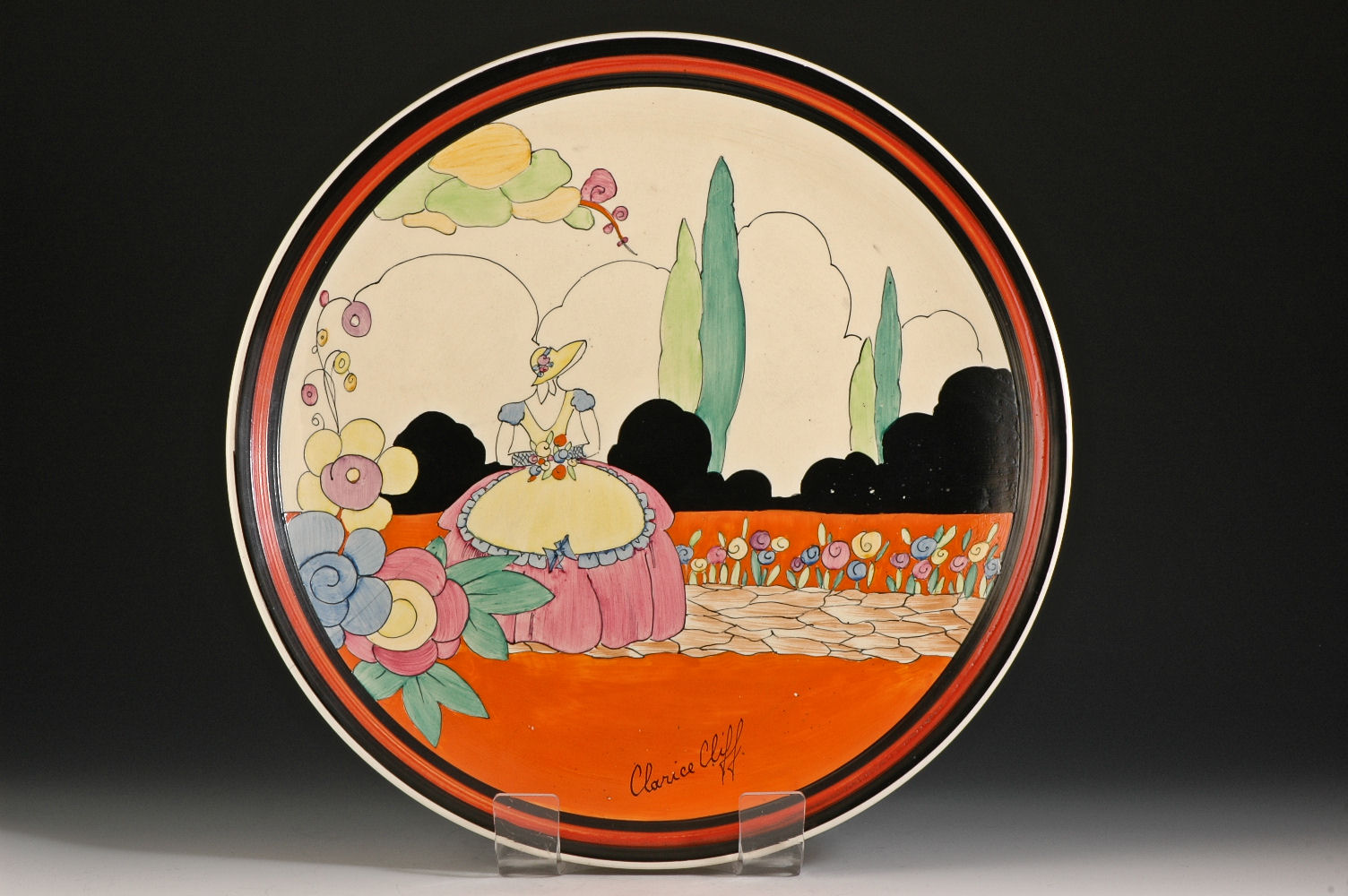 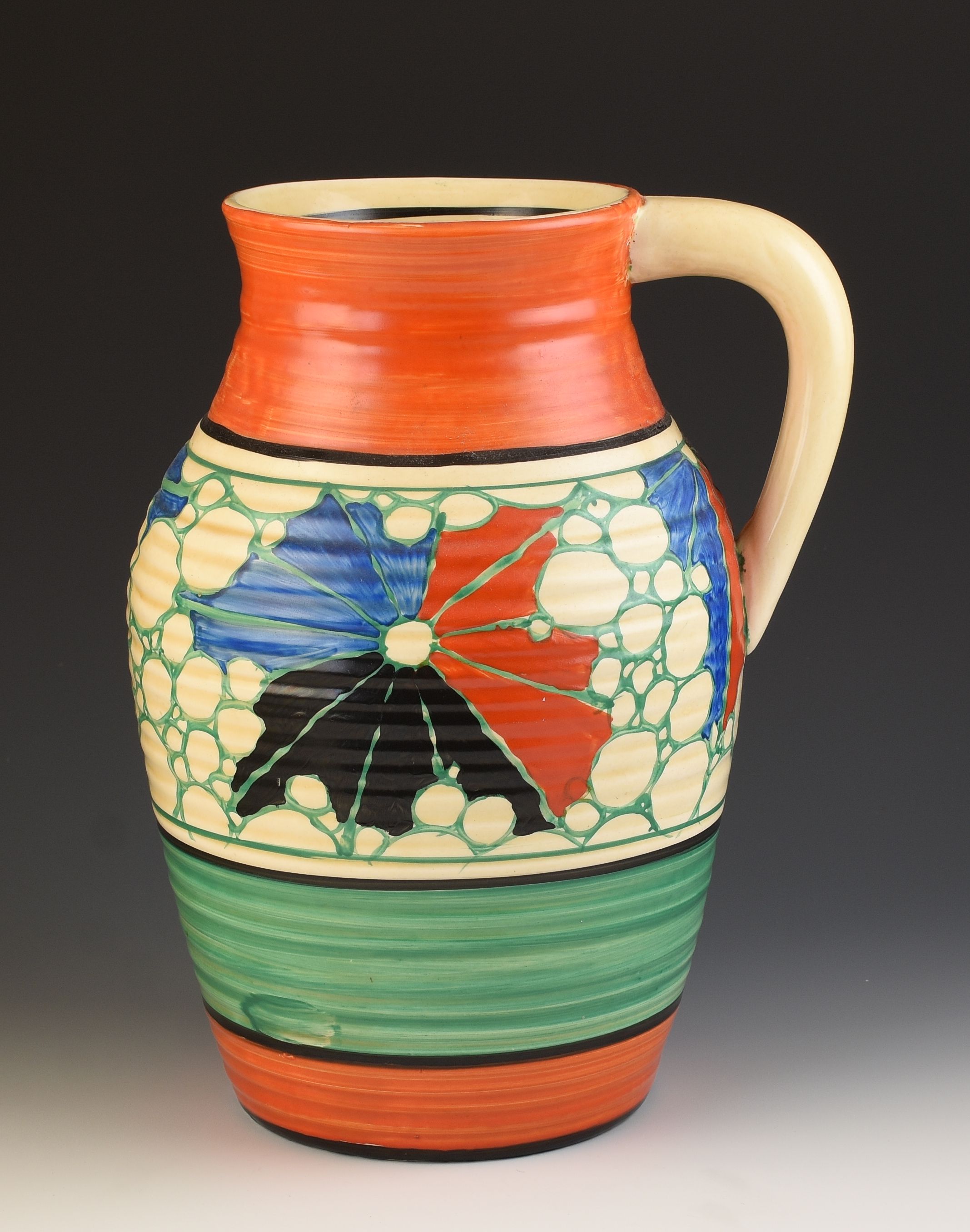 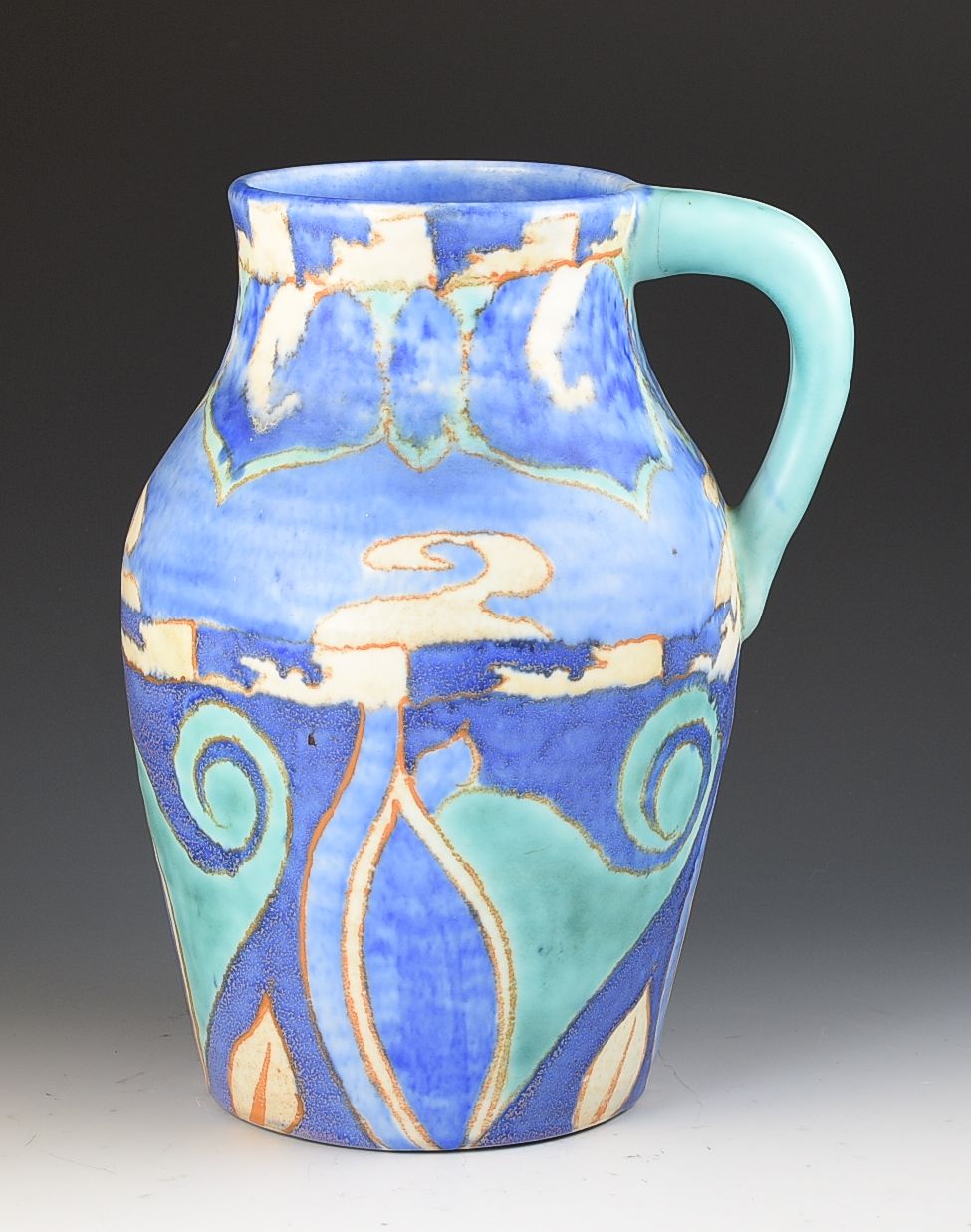 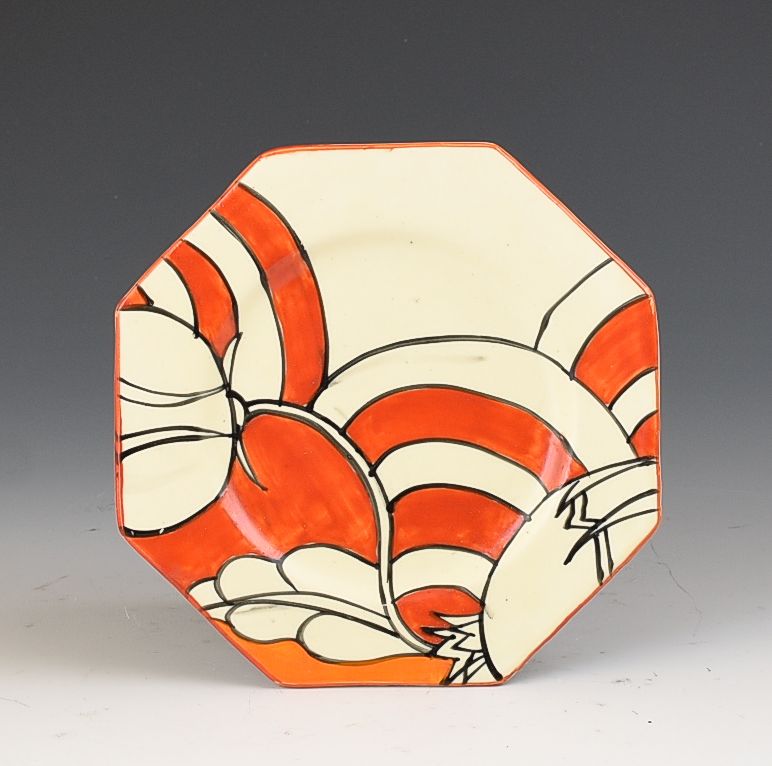 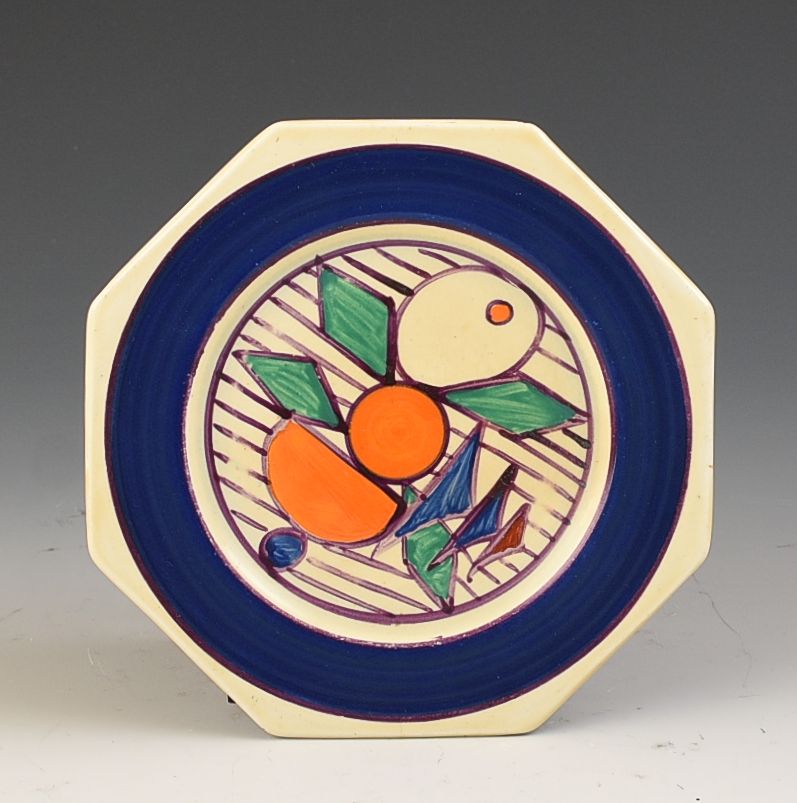 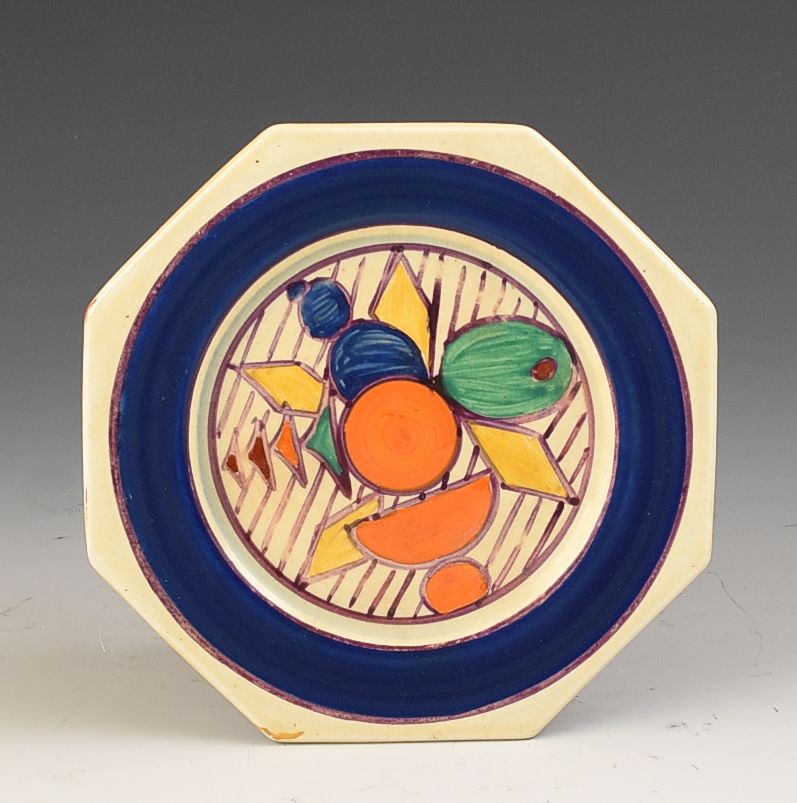 The Art Deco movement had a major influence on her work and her commercial success. Cliff’s ceramics, with their distinctive shapes and appealing, bright colours, brought modernity to the kitchen sink.

Cliff began working in the pottery industry at the of 13, later studying art and sculpture at Burslem School of Art, moving to the A. J. Wilkinson factory in 1916.The ambitious Cliff acquired skills in modelling figurines and vases, gilding, outlining, enamelling, she was offered a second apprenticeship at the factory in 1924, aged 25. Within three years, she was given her own studio at the adjoining Newport Pottery, where she experimented with on-glaze enamel colours.

Cliff’s first productions were called ‘Bizarre’, and were decorated with crude, bright colours and covered imperfections in simple triangles. Earliest examples had just a hand-painted mark usually in a rust coloured paint, ‘Bizarre by Clarice Cliff’. Bizarre Ware was an immediate success, as the designs – with their abstract, geometric and figural forms – were in the popular Art Deco style and were inexpensive. A professional ‘back stamp’ was made: ‘Hand painted Bizarre by Clarice Cliff, Newport Pottery England with the early pieces simply known as Original Bizarre. 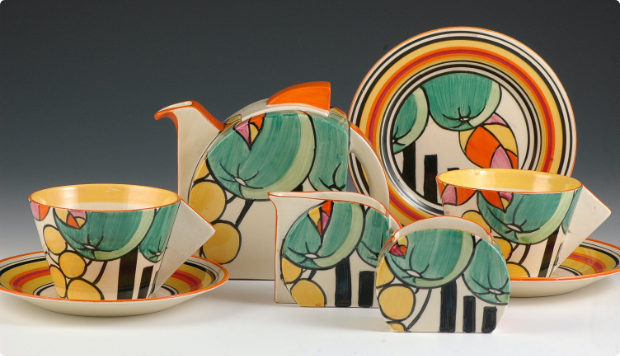 In the following years, Cliff added hundreds of patterns to the original range. In 1928 Cliff produced a simple, hand-painted pattern of crocus flowers in orange, blue and purple. Each flower was composed with upward brush strokes, then green leaves added, by holding the piece upside down and painting thin lines among the flowers. The ‘Crocus’ pattern was clearly completely hand-painted, which instantly attracted large sales. It became Cliff’s signature design. Cliff was given a team of painters to work on ‘Crocus’ in the ‘Bizarre’ shop where painters were trained how to do the pattern. By the late 1920s, amid economic recession, her career was excelling and by the end of the decade, her team of decorators had grown to 70 young painters, mainly women as the shapes adopted a more modern aesthetic. 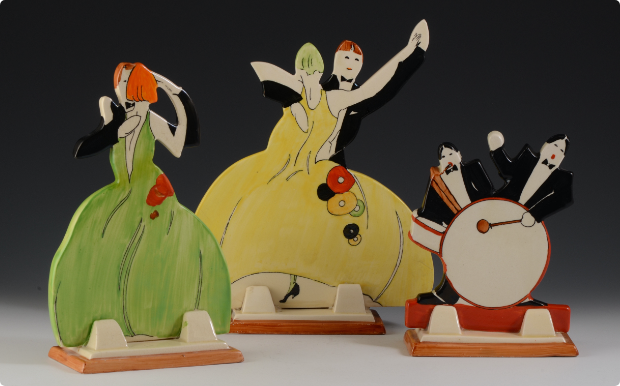 The Art Deco aesthetic with abstract and cubist patterns appeared on these angular and geometric shapes for the domestic setting, creating striking factory ceramics – plates, jugs, teapots, cups and saucers – that were designed to be used in the home. Sunray’ is a vivid example of Cliff’s Art Deco sensibility. The Fantasque range evolved by the early 30s featuring abstracts or landscapes of cottages and trees. The sunray, or sunburst, with its evocation of joy and nature, was a popular Deco motif, which featured everywhere from windows to hotel foyers. Cliff wisely took on this easily abstracted image and adapted it to bold effect, using enamel paint on earthenware. Cliff also began placing emphasis on the shapes of her pottery, finding different ways to best display her designs. From her triangular teacup handles to the distinctive conical form of her sugar casters, she looked again to Art Deco, and its fascination with the geometric rhetoric of Cubist art.

Cliff marries her then boss, Colley Shorter in 1940 and she moved into his home at Chetwynd House in Staffordshire, a beautiful arts and crafts house, where she concentrated her creative talents on gardening in the massive 4-acre garden that became her shared passion with Shorter. After his death in 1963, Cliff retires and becomes a reclusive. Her first exhibition of Clarice Cliff Pottery opened in Brighton in the early 70s, and soon after Cliff died suddenly in 1972.

Cliff’s worldwide impact was made clear by a story in the ‘Pasadena Evening Post’ in California, featuring her with a 5ft high horse made entirely of Bizarre. The publicity she received in national press was unprecedented. In the 1970s and 1980s their popularity was revived, leading to worldwide collectability, and establishing Cliff as one of the key names of the Art Deco movement. 1999 is celebrated worldwide as Clarice’s Centenary year. Cliff’s work continues to be esteemed and sought after by Art Deco ceramic collectors ever since. 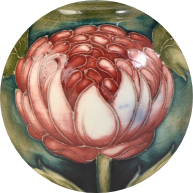 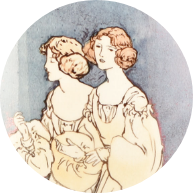 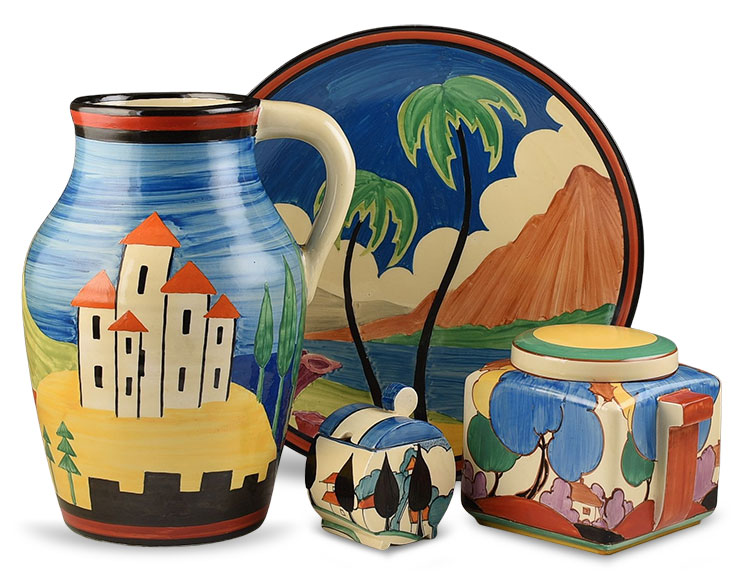 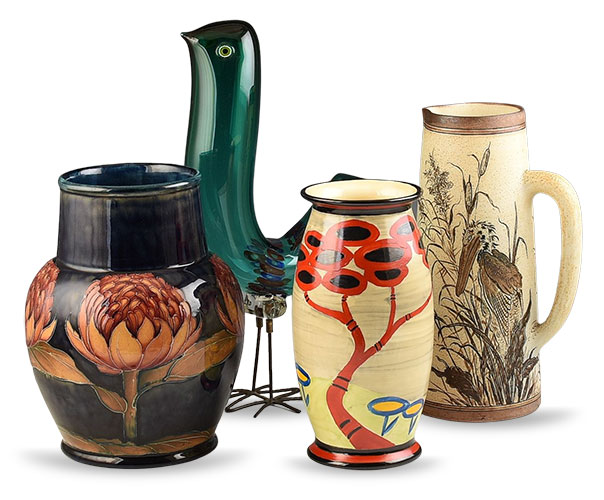 Do you have an item to sell? 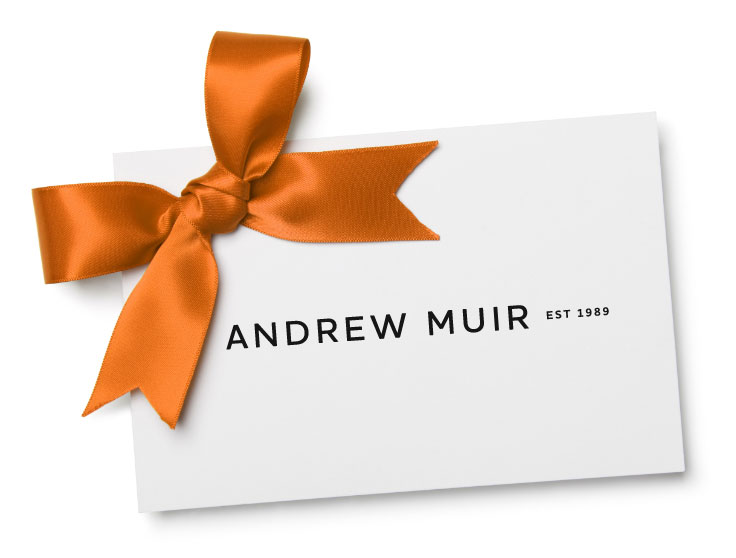 Looking for the perfect gift?

Why not buy a loved one an Andrew Muir Gift Card?

Why sell to Andrew Muir?